And school is back in session! For the many tens of readers out there, my apologies for the lack of posts this summer.

As lamented in this Die Kreuzen standard:

"it's been so loooonnnggg"

Where did the summer go? Endless sunny days filled with debates about whether Dave Lombardo should be pounding drums for the Misfits reunion shows and whether Raymond Pettibon is really Greg Ginn's brother.

Or more crucially, speculating on whether it would be an even bigger affront if the Dead Boys Sonic Reducer was appropriated in an Audi car ad instead of The Stooges Search & Destroy.

Actually, I could see it working for a Tesla commercial (shudder):

Well to start off with, and apropos to my opening salvo, this happened and me and a buddy sorely regretted missing out on it for the rest of the summer: 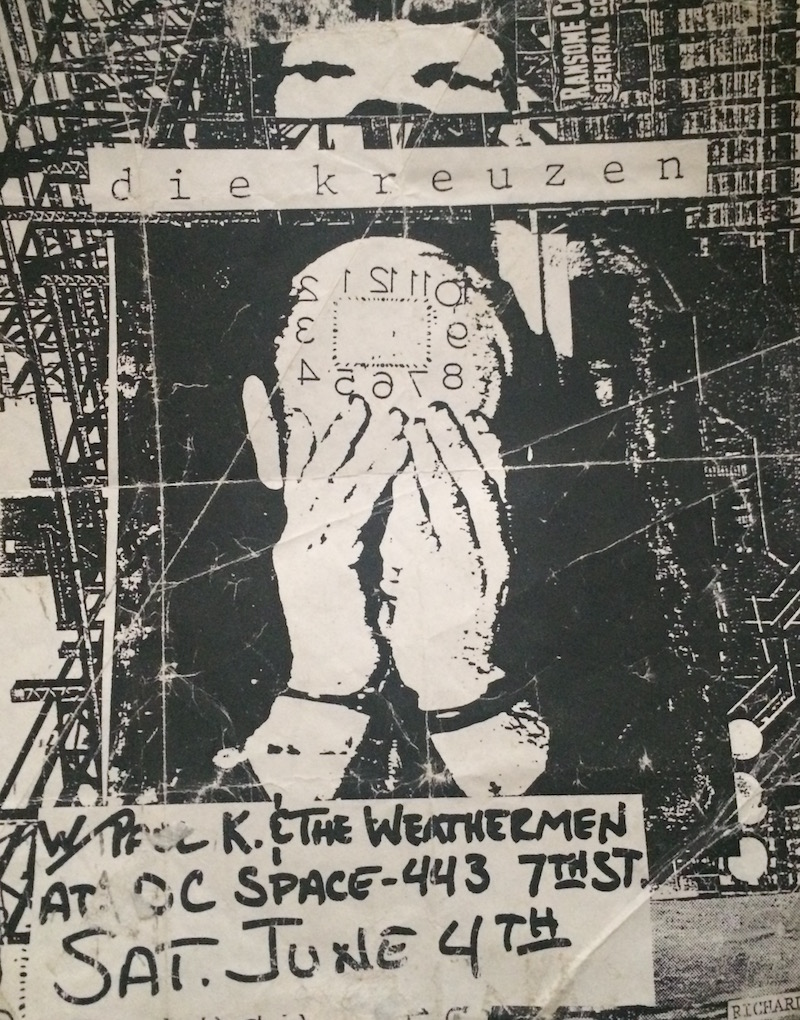 I'll grant you that the voice of Dan Kubinski is an acquired taste, no doubt, but that T&G record was pretty fantastic and holds up even now. That clip from the Die Kreuzen '83 public access performance - priceless. I'll include it here in case you missed it.

One last anecdote about Die Kreuzen gives me occasion to namecheck Northern Virginia's finest export, David Grohl (aka Dave Grohl). At the dcspace show in the above-appearing flyer, I have a distinct recollection of hanging out with Dave and a few NoVa homies in a car parked in a vacant lot around the corner, stabbing beers among other things.

I should add that most of us who had been straight edge in the early years had moved beyond it by this point. And there was no finer place to stab beers (or smoke dope for those inclined) and crank tunes before shows and in-between bands than this vacant lot next to dcspace.

I can't say how close in proximity it was to the venue, but it was definitely our go-to hang-out spot for shows there or in the nearby old 9:30 club. I vaguely recall running away from a mugging attempt or two - weak ones mind you, but mugging attempts nonetheless - strolling back to this lot.

Be aware that even though I was under 21, I was actually legal in DC having been grandfathered right before the legal drinking age in DC got bumped from 18 to 21. Not that it really mattered, in that part of town in those days, if you had the swagger to step to the revolving window of the little markets dotting the area, you could get a can of your favorite cheap beer no questions asked.

Anyways, it was in this very same lot that we were cranking music and doing whatever else in the car with Dave Grohl. Dave was playing with Scream at that time and they had just returned from a European tour including a prolonged post-tour stint in Amsterdam (natch if you knew the Scream boys). Evidently Scream was big in Europe and had great crowds everywhere they played.

I recall with amazingly decent clarity (for me) that Dave was 100% amped to see the Die Kreuzen drummer live, which even then was no small praise. Then again, Dave always seemed 100% amped about everything.

And when no less a legend than Thurston Howell Moore has this to say about your band ...

"Man, there was a point there when Die Kreuzen were the best band in the USA".

... well then, you're doing something right, I think. I suppose that's an inordinately long way of saying that damn, we shouldn't have missed that show this summer.

Speaking of Scream, apparently there was a Banned in Babylon art show in Echo Park (LA) during which the following performance broke out:


Seeing Pete and Dave sharing a stage together brings back some great memories, sprinkle in a Bad Brain member here or there (was only able to pick out one in the clip though) and the odd Moby (? - cue *One of These Things (Is Not Like the Others)*), mix them together to play a classic hardcore tune like *Big Takeover* and you've got pure punk gold. Wish I'd been there.

It's a little striking to see Pete completely bald but he sure moves and sounds pretty much the same as always on stage.

My buddy Erik the old NC (North Carolina) punk called attention to this little nugget during the summer.

And just to show this doubting Thomas he was not bullshitting, Erik proceeded to send me a link to Happy Go Licky on bandcamp. And lo there it was! I was surprised to discover that the live Happy Go Licky songs presented on there are the exact same live recordings I had on tape from my favorite bootleg tape hoarder once upon a time. 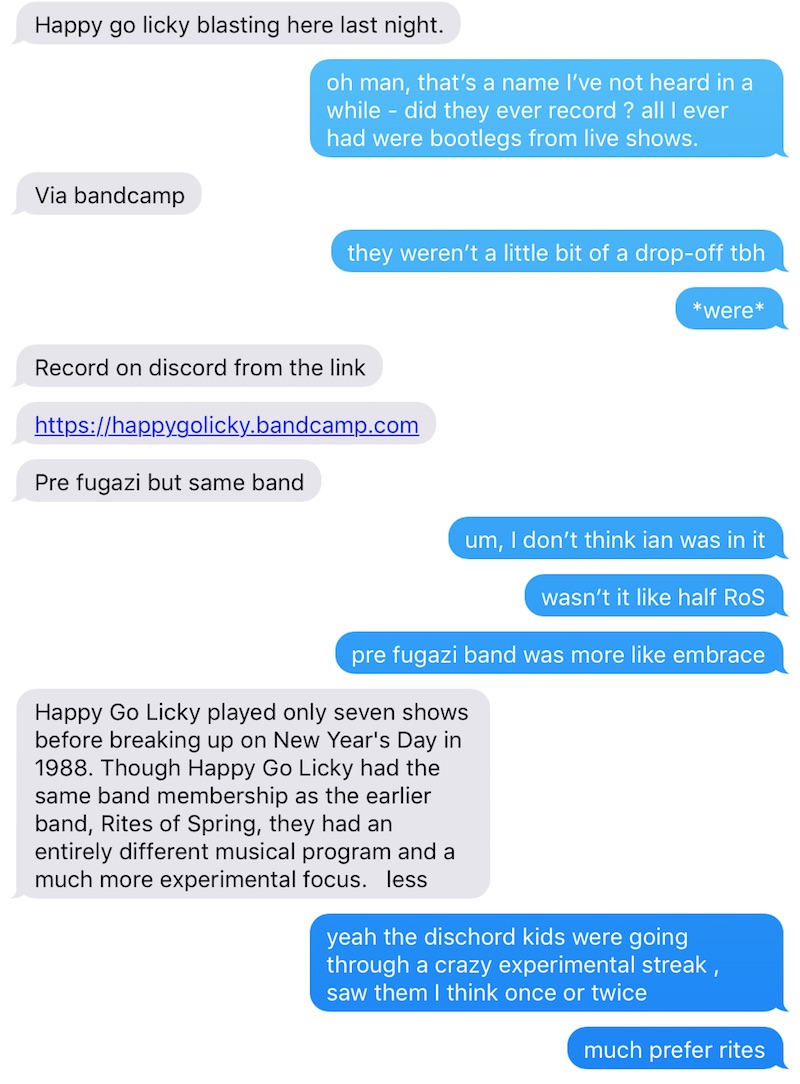 And with that "much prefer rites" pronouncement I had relegated Happy Go Licky to also-ran status in the Dischord pantheon. On recent listens, my off-handed dismissal was not altogether fair, they definitely were stretching musical boundaries for that time and paved the way for a band like Fugazi to explore even newer territories with their sound.

The 3 other dudes were biding time before going to a local event celebrating Penelope Spheeris (the creative genius behind the hallowed Decline of Western Civilization series), which included some of her short films, a Q&A session with Penelope in the flesh, and then a screening of her classic Suburbia as the pièce de résistance. Enough said, we four were proper punks.

There was a modicum of the requisite flashing of punk bona fides - though not to the extent that it required the mediation of a measuring stick - but mostly it was just good old bullshitting about various bands. It was good times.

For example, the topic of the Minutemen and Mike Watt came up and this is roughly the patter that followed:

Old guy #1 (David) who was sporting a sweet Gun Club t-shirt that earned instant admiration from all of us had seen them live in '85 or '86, he wasn't sure, which birthed a lively debate about what year D Boon died because it's far more fun to try to puzzle it out from our very fallible memories than to google.

I ruefully noted I had never seen the Minutemen but offered that I had seen Firehose on their first tour, and then further diverted the conversation by making some back-handed comments about Ed (fromohio). Poor guy, wasn't his fault he was no D Boon. Besides we all agreed that Ed had served a higher purpose by coaxing Mike Watt and George Hurley to start playing again.

Not to be out-done, Erik the NC punk rocker (a one-time vocalist for the NC band Subculture, not to be confused with the Subculture Oi! band from the UK) threw the haymaker - he had seen the Minutemen's last show before the accident that took D Boon from us way too soon.

The fourth guy Ian (not that Ian) or maybe it was David talked about seeing them as they pulled up for a show in Portland. Apparently they called out to him or the members of the opening act or someone, anyhow, and inquired if the opening band was a punk rock band, and the reply was "naw", to which they responded with something like "good because we're not a punk rock band either!".

I may be fucking up the story but I never let that get in the way of making a long-winded point.

And that point is... yes and no on the question of the Minutemen being a punk rock band. The Minutemen didn't conform to the sound and style of typical punk music. They wore their musical influences on their sleeves that were often on the un-punk side of things (notably Blue Oyster Cult, not that there's anything wrong with them).

mr. narrator
this is bob dylan to me
my story could be his songs
i'm his soldier child

our band is scientist rock
but i was e. bloom and richard hell,
joe strummer, and john doe
me and mike watt, playing guitar

And they could really play their instruments. Well. Which was kind of not typical for punk bands back then.

But the Minutemen sure approached music with an edge and passion wrapped in strong personal and political messages that grabbed you. And they put on legendary live performances. I remember another Ian (that Ian) telling us how they were one of his favorite bands to see live when we made one of our pilgrimages from the burbs to Dischord house.

The Minutemen's Double Nickels on the Dime gem of a record came out at about the same time as the Husker Du masterpiece Zen Arcade, or so it seemed, and those two combine to form arguably one of the most important and influential 1-2 punches of punk rock releases in modern times. Doubly so because they both were double albums.

Anyways, the conversation moved on to Mike Watt's solo stuff and other projects, which received universal approval from our esteemed assemblage of punk heads. And then Ian mentioned in passing this Secondmen / Missingmen group that Mike Watt sometimes tours around with, it's basically Mike with some guitarist and drummer doing strange versions of Minutemen songs accompanied by a Hammond organ! I gotta get some of that next time they are in town, for sure.

"Close your eyes
Open them
take our test"

I mention this rather unremarkable bullshit session (no offense guys!) 1) as an excuse to write up some stuff about the Minutemen and 2) to encourage fellow punks far and wide to take part in the conversation.

I've made it even easier to leave comments, you don't have to even login now. So if you feel like chiming in, please do!

And last but not least, it appears they've canonized a new saint : 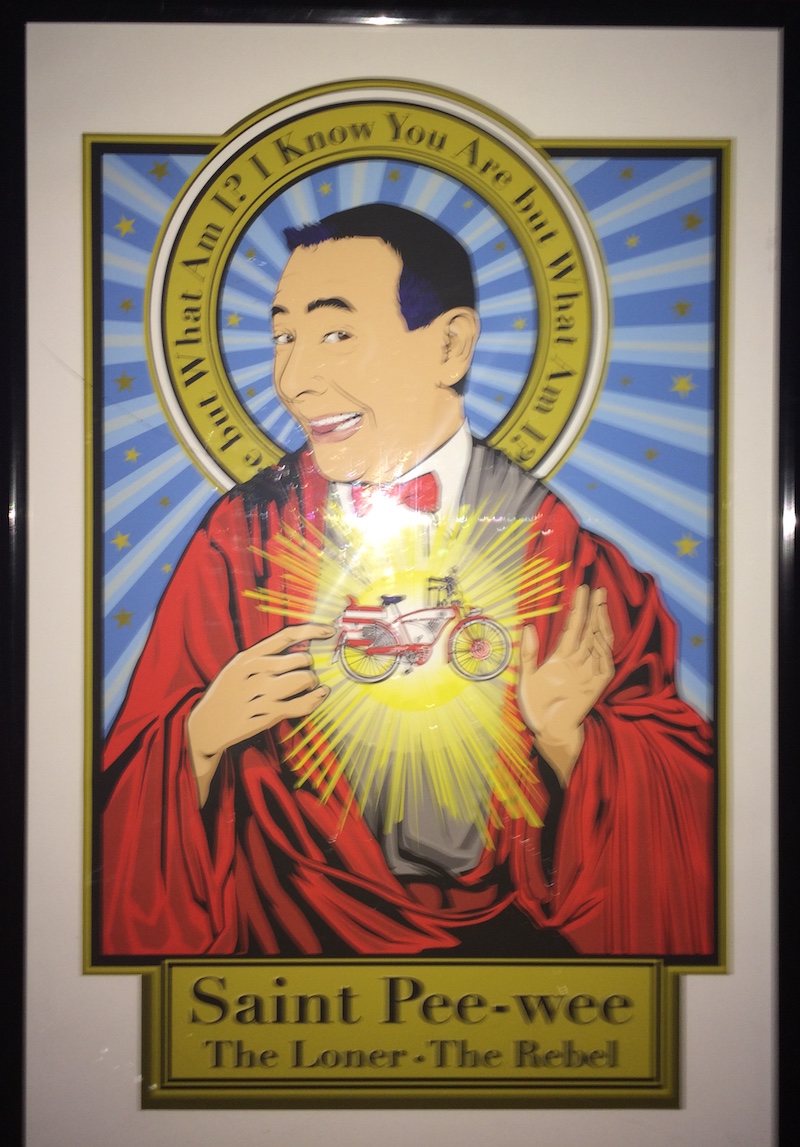 found in a tiny gallery in Seattle's Substation, think the artist is Zeuf - I took a photo of his info but it was too blurry (hard to believe when you look at how clear this one is)

I close with a little Minutemen ditty that lends the right amount of spiritual gravitas befitting such a moment (and RIP D Boon)...

Vintage Black Flag punk rock bicycle sighting, be still my heart: And then for some reason this goes through my head ... "Grab my blue backpack, my walkman, grip my bicycle" Deftones, 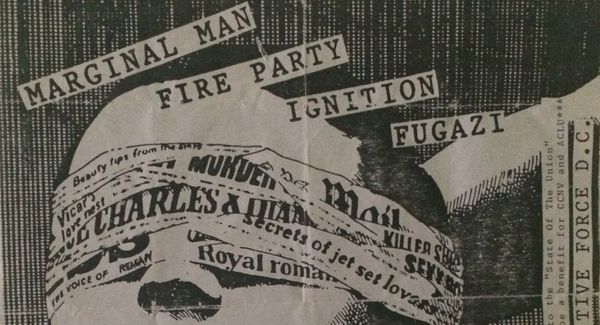 I love this flyer, it has that DIY quality to it while capturing the political urgency of those times. Pretty good line-up too, eh, including a not-too-shabby opening band - all for $5