In my epic post on getting to my first show I mentioned Killroy at the RAR in 1984 and the Believe in the Ruins 12" EP I picked up while there. In retrospect, I had a difficult time reconciling some things about the record:

On later listen it sounded nothing like I remember them sounding live and come to think of it the photos on the record didn't look much like the band either. Kinda puzzling, but whatever.

Then there was the reference to "Peter Test Tube as The Hero". I didn't Google then or now to check whether that was Peter Test Tube as in Peter and the Test Tube Babies, but it left me wondering as it sure sounded like there were multiple very different voices on the recording.

And just now I spotted a last hidden detail that somehow escaped my notice previously - this puppy's on Mystic Records, home of Nardcore!

Ok, now that I've dispensed with the fascinating intrigue and details surrounding this album, shall we spend a few minutes revisiting the music?

The first song The Scream/Say It With Soul is an absolute must-listen. Opens with Moonlight Sonata on the piano which gives way to a blood-curdling scream (hence the song title) and then the crunch of a guitar (again oddly a bit more metallic sound than I remembered from the live show) and a croak throated singer shouting out lyrics that lead to a nice uk-punk-sounding chorus, complete with "oi, oi, oi, oi". Anyways that song was always a classic song to crank full blast strictly for shock value.

Don't take my word for it, here listen for yourself, just play it loud and maybe don't do it around co-workers or elderly folks or kids or pets ...

I kept the record on spin after the first track which led to a re-discovery of how the rest of the side is pretty solid. Reminiscent of Adolescents and chock full of hearty choruses, I rather enjoyed it when I had been fully prepared to yank the record after hearing the opening masterpiece.

While the 2nd side kind of drags as much as a side containing three 2-minute songs can drag, I actually did make it to the final track on the flip which I remember because of the catchy song (but is it wrong of me to be reminded of Pat Benatar in the opening guitar part?) and catchier message

"No more tourists, California will see the day!"

which ranks as perhaps the finest anti-tourist punk song ever made. I believe the inverse version of that song would be the anthem for my adopted republic of Portland right about now.

Best of all about No More Tourists, my ears caught on this lyrical nugget which I remember being tickled about way back in the day:

"these are the people whom we hate"

There it is, a punk rock band not afraid of using whom in a song.

White Side
1. The Scream/Say It With Soul

3. Believe in the Ruins

Orange Side
1. Red Alert
2. The Battle
3. No More Californians Tourists

As I was knee-deep in taxes during the week, this adaptation of the Misfits classic Bullet was playing on endless loop in my head ... Taxes is the reason that the president's dead! 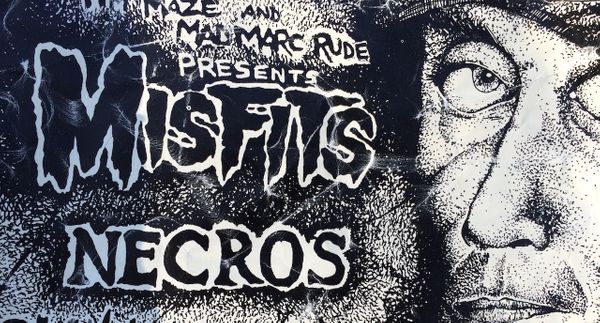 I might've mentioned that when I was coming up there was no World Wide Web that we know and hold dear in these here modern times, right? I'll likely say this in every