In reminiscing about my epic journey to punk vinyl, I am struck by the vaguest memory of the first records I bought:

I'm pretty sure it was the TSOL 12" EP and DOA Bloodied But Unbowed... in some order.

Coincidentally they both happen to include a song titled World War 3. And not so coincidentally, both of these records have picked up the same layer of residue from some grimy turntable I had the punk rock gall to use while damning the dirt and dust on it.

[note: adding in this Spotify playlist for folks to listen along, see how this works out]

thoughts on Bloodied But Unbowed

I loved the DOA record so much and it was easy enough to find that I replaced some time later. Even in the early years I recognized this was a collection of DOA recordings from much rarer releases like Somethings Gotta Change and Hardcore 81 (someone can fact-check me somewhere on the googles) and some hard-to-find EPs . I wasn't a first-order record collector at that time and so it didn't bother me.

Here are some choice highlights from this LP:

The Prisoner: I had heard this song before on the Let Them Eat Jellybeans comp, but no matter, this track is the best of DOA rolled up into one short burst - energy, unintelligible growling from Joey Shithead, great chorus ("I am the Prisoner, the Prisoner, the Prisoner") and a rousing finale that I defy you not to holler "hey!"s along to. Biscuits on drums never sounded finer.

Fuck You: Kind of hard not to be affected by this song. A song with a chorus that goes a little something like this:

may not do much on the shock scale in these modern times, but suffice it to say it made an impact back in the day. Oh the sound and fury of this song - a go-to blast when you were pissed off or wanted to make someone else pissed off.

"we're just pawns in the middle,
sittin' ducks with no acquittal"

thoughts on the TSOL 12" EP

This eponymous TSOL 12" EP is a little harder to find I think. It's on Posh Boy, and because of that the record geek in me instinctively expected to see a crappy plastic inner sleeve that Posh Boy records always seemed wrapped in (and were a major pain in the ass to cram back into the album cover especially in a hurry).

Dude who sings (ok I know his name is Jack) sounds like he's doing a bit of a Brit accent. In the punk rock documentary American Hardcore he comes off as a bit of an asshole. I dunno.

But what I do know? This EP absolutely rips. It kills as much now as it did when I first heard it. I know this because I just listened to it front and back three times in a row and couldn't stop bouncing around while it played. My cats were in the basement throwing me the "wtf" face.

Superficial Love starts out with a bang, just a pulsating opening track. Somehow Jack begins the song this way

Superficial love, only for a fuck...

then works his way to

and finishes with this declaration

President Reagan can shove it!

That's covering some lyrical ground, no?

Some great punk rock bass-lines on this whole 12", like the one that ushers in Property is Theft - a power punch of a track.

No Way Out opens all relatively quiet and somber then dissolves into a pure shred-fest and reaches its climax thusly:

"America,
land of the free,
freedom and power to people in uniform"

which marches right into Silent Majority with the greeting "Wake up to the same old shit..." and building to "Wake up Silent Majority!!!" and yes I bellowed right along with each listen.

As for World War III, my copy of this record is in its worst shape right on this track and I like to think it adds to the listening experience by punctuating the end of the song with loud, apocalyptic crackling. I'll include the tail end for you to decide for yourself, plus you'll get a sense of the gross negligence with which I treated some of my older records. Regardless of the snap, crackle and popping, this song by any objective measure kicks complete ass and you'll find yourself singing along. 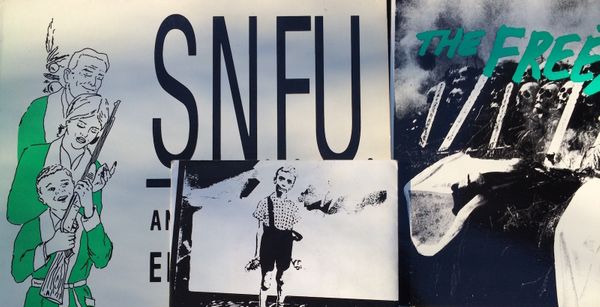 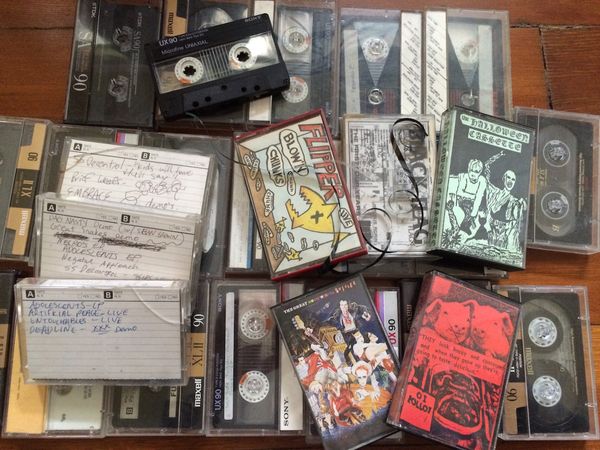 Warning geezer comment alert... It may be difficult for kids these days to imagine it, but there was a time in the not-so-distant past that you couldn't find and listen to the most