I'm recovering from the rabbit punch that left me without my very own neighborhood punk rock bar last year.  That's another story for another day.

The very first time I tried  Black Water Bar on for size, they had a nice line-up of post-punk-to-punk bands, including Arctic Flowers, a local band that has the chops.  I approved.

But the true highlight of that visit was when I spied a leather jacket with an "Oi Polloi" silk screen safety-pinned to the back. Oi Fucking Polloi!

It's not every day that you see someone repping Oi Polloi and I wasn't about to lose the opportunity to engage with the dude, figuring it would be a good ice-breaker to give him his propers for wearing the band on his back.

The validation seemed to do this kid some good, although he was more knowledgeable about the band's later work in the 1990s and said they were still around but had changed their sound. Or something. It was a punk rock bar after all and I don't know that we could hear each other all that well.

After separating from my new-found compatriot with a hearty "see ya around", my mind got to racing on the crucial matter of whether or not I still had the Oi Polloi red demo tape with the pigs on it.

The inner pessimist in me was quick to pronounce that it was yet another instance of a rare music recording that had slipped through my clutches - a casualty of numerous moves and gross negligence - and I sunk in quiet despair at the thought.

The next day I dug through my single box of tapes and sure enough, there it was. Like Indiana Jones discovering an ancient sacred amulet, I had recovered my own long-lost treasure. 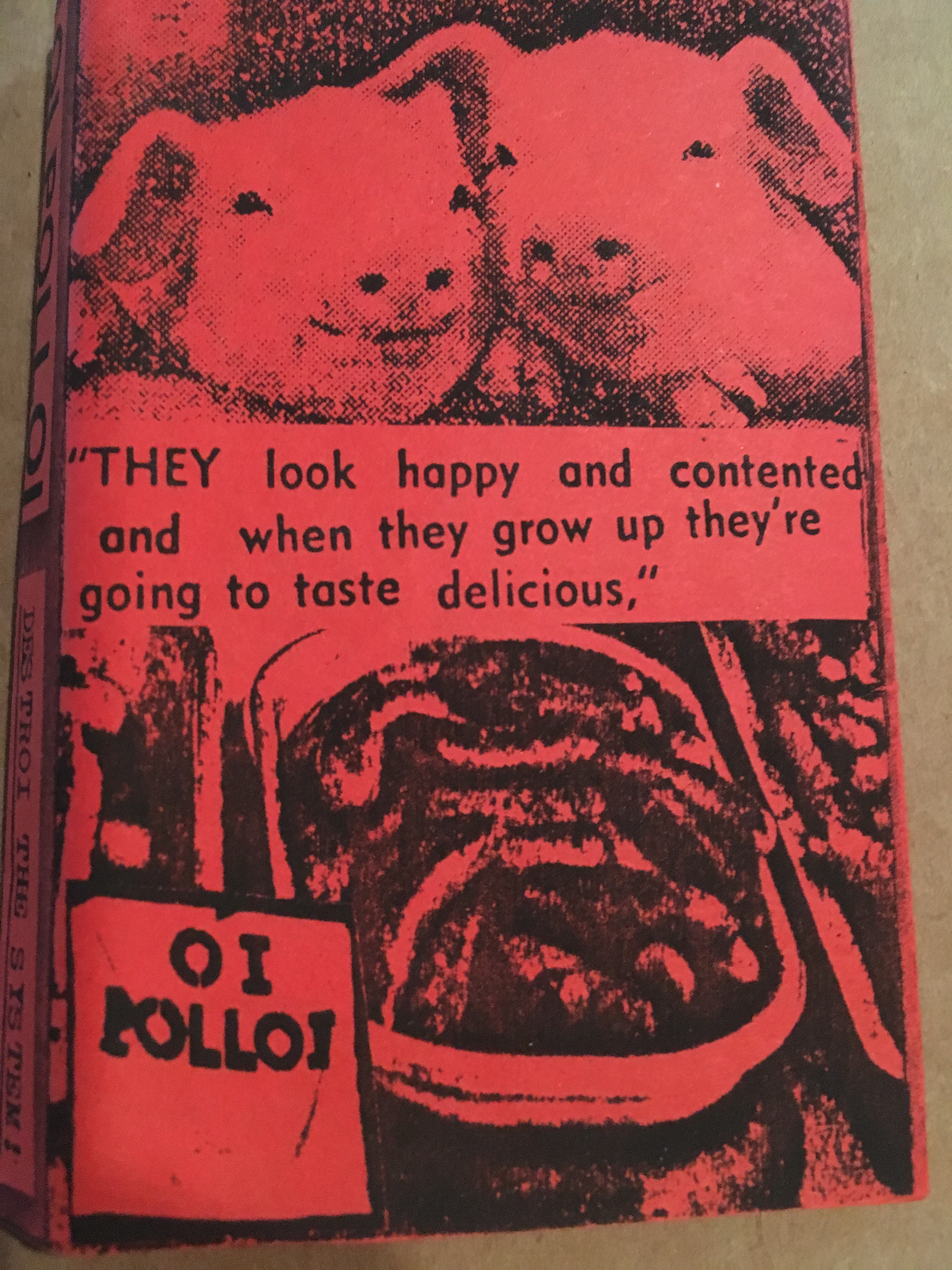 As an aside, not to get all anarchist-vegan-activist on you, my gentle reader, but I can't consider the tape cover art and that title without thinking of a moment when we were driving across the country, and we stopped either at a rest stop or a filling station and there was truck pulling a trailer of livestock.

As we peered into the holes of the trailer we were met with these soulful, pleading eyes staring back at us. All these dull metal containers full of pigs. That look.

Then my partner greeted the driver as he returned to the truck and she said something about them looking none too happy for the road trip, and he quipped, "well they'll be bacon tomorrow" or words to that effect.

Those pigs knew what was coming and I will never forget the expressions on their faces. Not at all like those smiling piggy countenances in the Oi Polloi tape cover, but that notwithstanding, the caption and general theme evokes that image burned into my memory - that look:

"They look happy and contented and when they grow up they're going to taste delicious,"

Not meant to be a buzzkill, if you enjoy your pork, cool with me, I don't judge. Just taking the time out to share this indelible moment I think of when I see that Oi Polloi tape cover. And now you know why Papa Punk declines partaking of the swine.

Getting back on-topic, Oi Polloi managed to combine almost mutually exclusive influences as a UK-based Oi band with anarchist, radical left-wing political leanings. Sort of like a Reeces peanut butter cup meant to appeal to both skinheads and Crass-holes alike. Of course.

My efforts to locate said demo tape was rewarded, for not only did I find the cassette intact and playable, lo, there was even a personalized message with my name scrawled lovingly on the label. 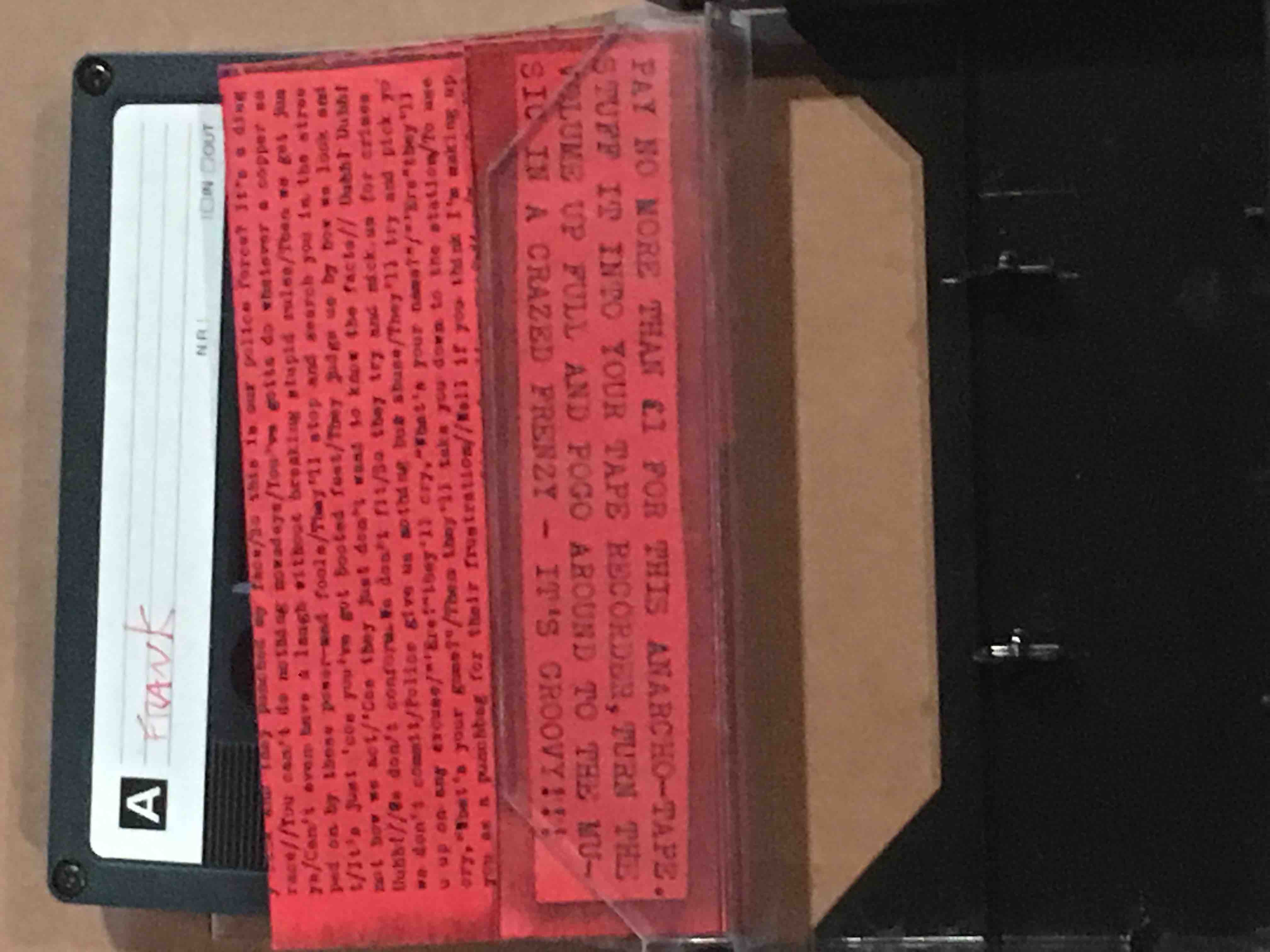 To get a more tangible sense of the West Side Story nature of the Oi Polloi concept, here is a snapshot from the cassette liner notes. Why that's a spiky haired anarchist in the Colin of Conflict mode (and with teeth that badly need fixing), and side-by-side on the kitchen counter is none other than a suspender-wearing Oi-boy skinhead happily perusing a cookbook of sorts, living in perfect harmony, making ANARCHOSALAD. 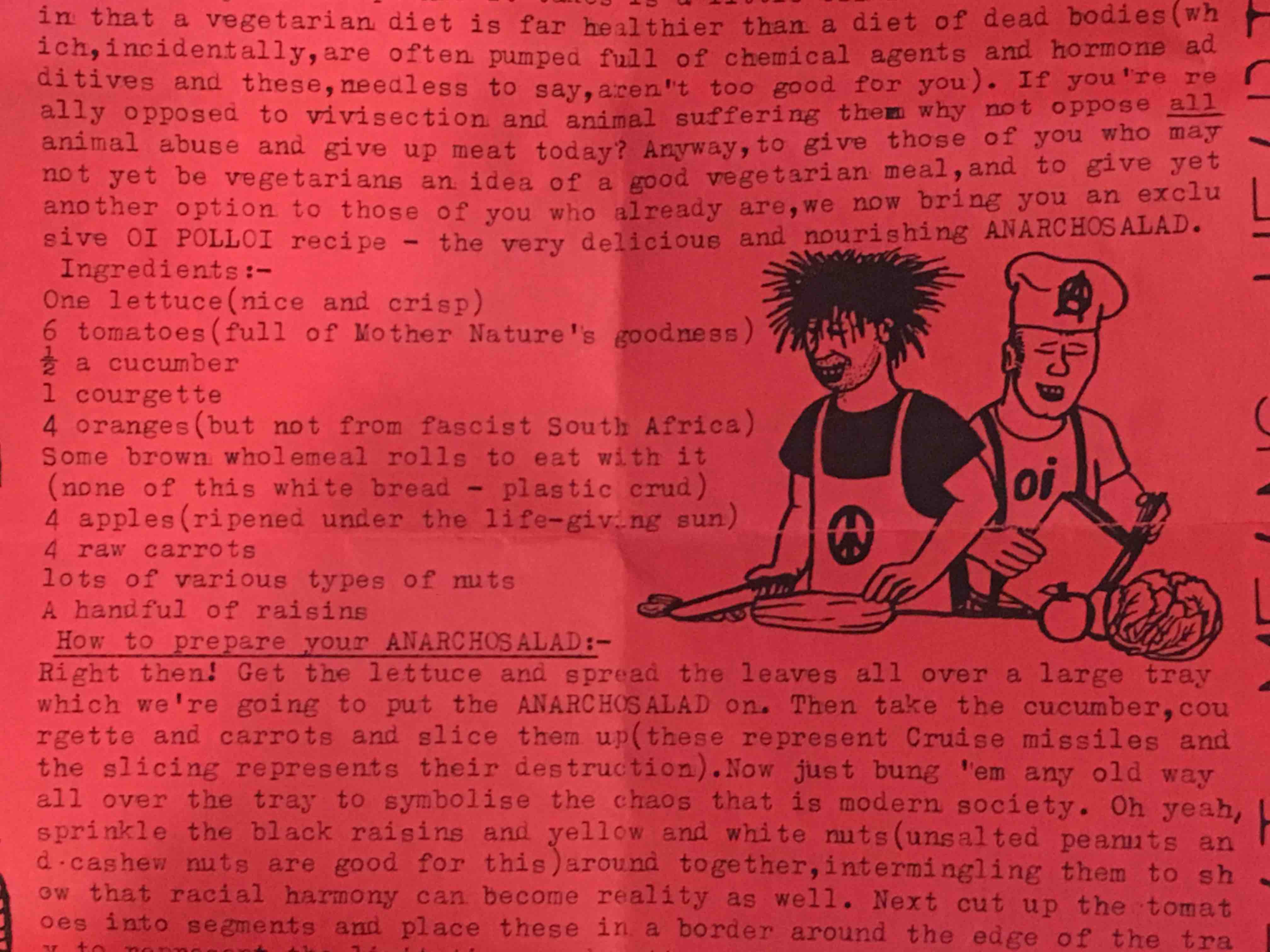 definitely worth a read - pretty sweet and funny (hopefully intentional)

For those of you exploring vegetarianism, it might come as a surprise that one way to give it a try is to make a salad! "Bet you never thought..."

I can hear you already clamoring for the good stuff. "Ok Papa, enough with the guilt trip that's making me all heavy, get to the good stuff, what's the music like?" 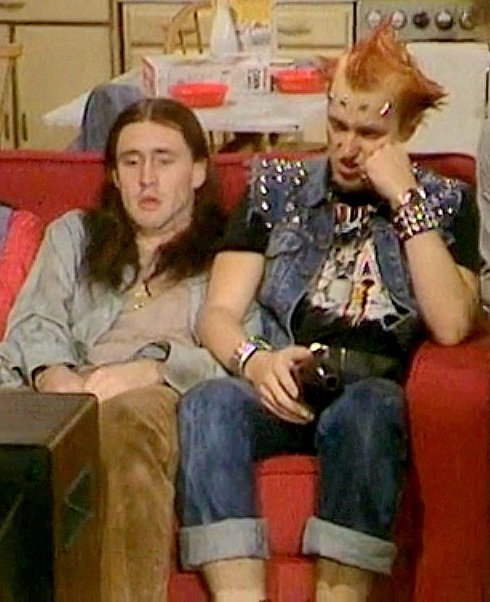 "don't get all heavy and uncool"

STUFF IT INTO YOUR TAPE RECORDER, TURN THE VOLUME UP FULL AND POGO AROUND IN A CRAZED FRENZY - IT'S GROOVY!!!

Here are a few fun facts from my listening experience that I'm happy to summarize for you: 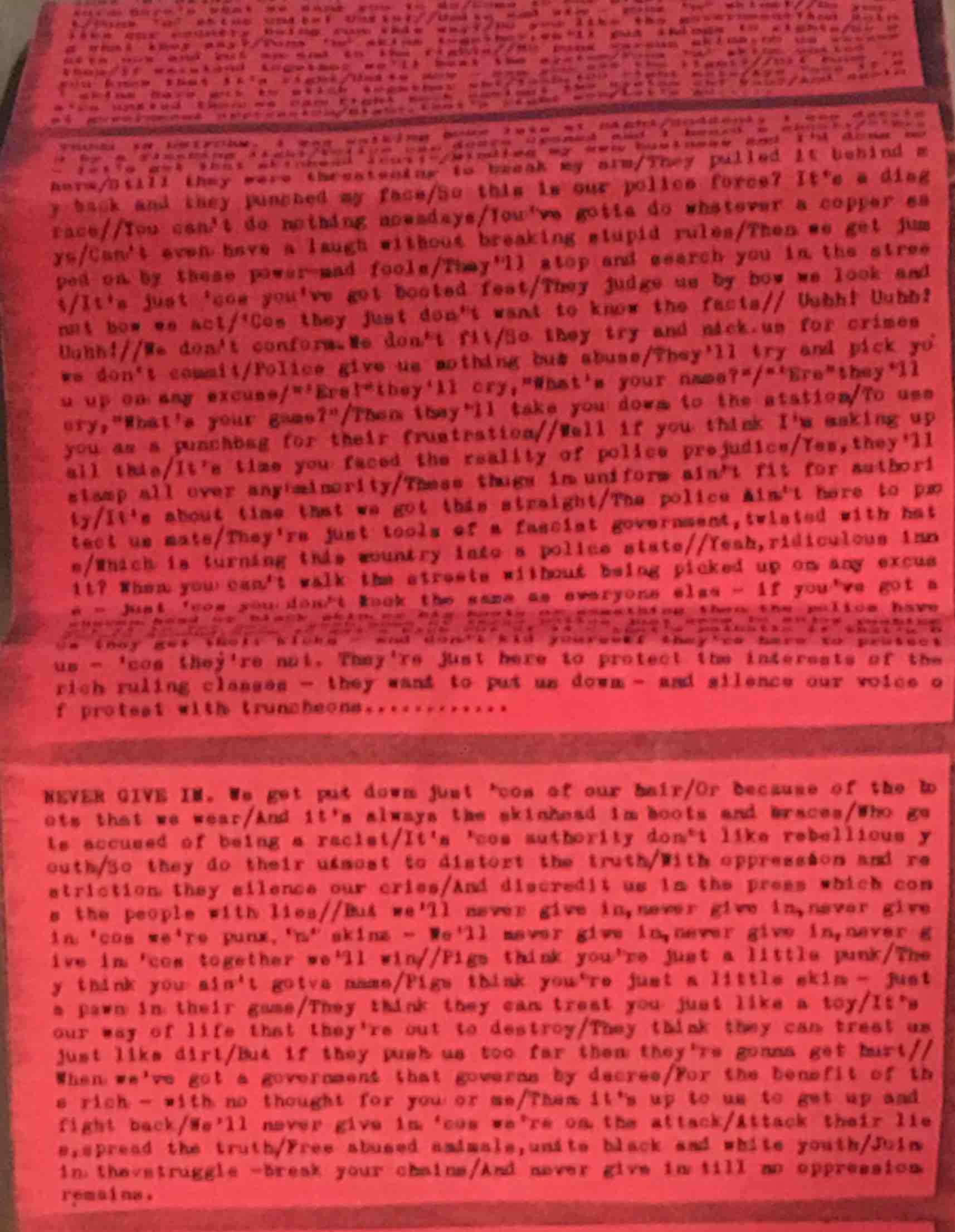 war and peace set to music

You can blame me for ruining your B-B-Q dinner. 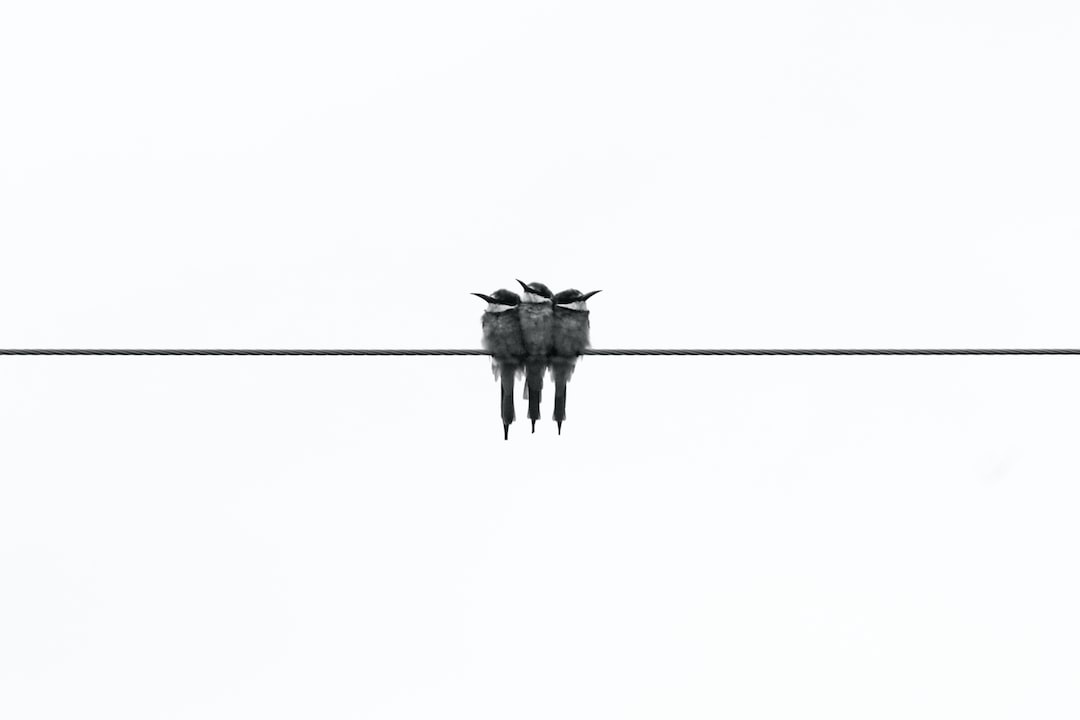 It's a funny image right? A badass punker peeping assiduously through binoculars like a bookish birder. Well the ink had barely dried before I came upon this article on birdpunking.

Imagine my joyful surprise when - after alighting from my steel steed and bending to the task of locking frame and front wheel to bike staple - my slow gaze fell on this sticker with Ian mugging at me.