So I've been trying to wrap my head around the fact that nearly half the people in this country have chosen to send a pig to the White House. I'm at a loss for words, which will strike the handful of readers here as unusual to say the least. 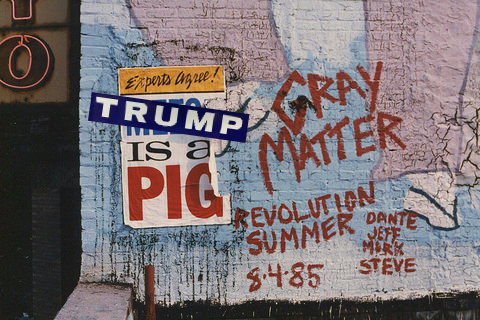 Rather than pontificating at length like a gazillion other folks I'll share a playlist that represents a kind of punk rock soundtrack of my emotions in the aftermath of the election results. Maybe some of the songs will resonate for you, maybe they won't, but there you have it.

"What is this world coming to?
Both sides are right, but both sides murder
I give up, why can't they?
I must not think bad thoughts"

X, I Must Not Think Bad Thoughts

"With all the ways of communicating
We can't get in touch with who we're hating
...
With all this uptight pushing and shoving
Keeps us away from who we're loving"

Hüsker Dü, Turn on the News

"Hey, Kool Thing, come here, sit down
There's something I got to ask you.
I just wanna know,
What are you gonna do for me?
I mean, are you gonna liberate us girls
From male white corporate oppression?"

"I’m not a real woman,
I don’t waggle my hips
Or flapple my eye lids or shapple my lips
And I’m not a lemon,
So please don’t squeeze my pips"

"Looking through the headlines
You’re sheltered from what’s real
There’s a heat in the street
That you can’t feel
Bedlam in the streets of the USA!"

"I don't know about later
As for now, I know how to avoid the paranoid
Man, I've had it up to here
Gear I wear got 'em going in fear
Rhetoric said and
Read just a bit ago
Not quitting, though"

Public Enemy, Welcome to the Terrordome

"Let the night roar with us!"

"We know that you're scared
Of what you see all around,
We don't fit your dream, your safe reality
But we'll do what we want,
Because we got to be free"

Big Boys, We're Not In It To Lose

"It has been suggested in some quarters,
That these are not enough
Well...GET OFF THE STREETS!!!"

The Clash, Know Your Rights

Movies are turning out to be an unlikely source of inspiration for me to post here. For whatever reason I seem to find my muse in the hallowed confines of our nearby indie

I've got to give it to the Spotify artificial intelligence sorcery used to cook up the Discovery recommendations for me this week. It's downright spooky they were so on the nose with some