Movies are turning out to be an unlikely source of inspiration for me to post here. For whatever reason I seem to find my muse in the hallowed confines of our nearby indie movie house that dates back to the Prohibition era. I blame the ghosts.

Case in point: Last Friday me and the first lady of Papa Punk decided to check out the new film from Jim Jarmusch which was opening at the much-revered Hollywood Theatre that night. 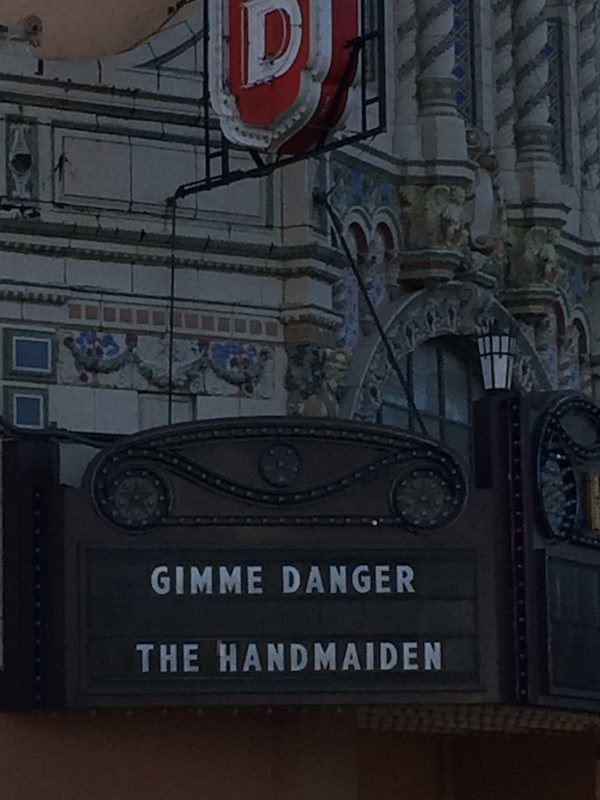 I'm a big fan of most anything Jarmusch but I'd be remiss if I didn't throw an extra nod to Mystery Train, brilliant in it's languid pace and casting of Joe Strummer as Johnny.

"check your guns at the baw!"

In retrospect, it would have been a little odd if Joe Strummer hadn't been given that part when you consider that the role had been written specifically with Joe Strummer in mind.

But that's neither here, there, nor everywhere.

So back to the new Jarmusch joint. To give you a proper sense of the kind of out of touch fella I truly am, I had no idea what the new movie was going to be about as I sauntered happily on a fine autumn evening to catch the early, blue hair show time.

Imagine my surprise when I came upon a movie poster at the box office with Mr. Iggy Pop striking a half-child's pose at the front of a sprawling stage and with the rest of the original bunch of Stooges keeping a wide berth in a crescent formation around him. The name of the movie -- Gimme Danger. 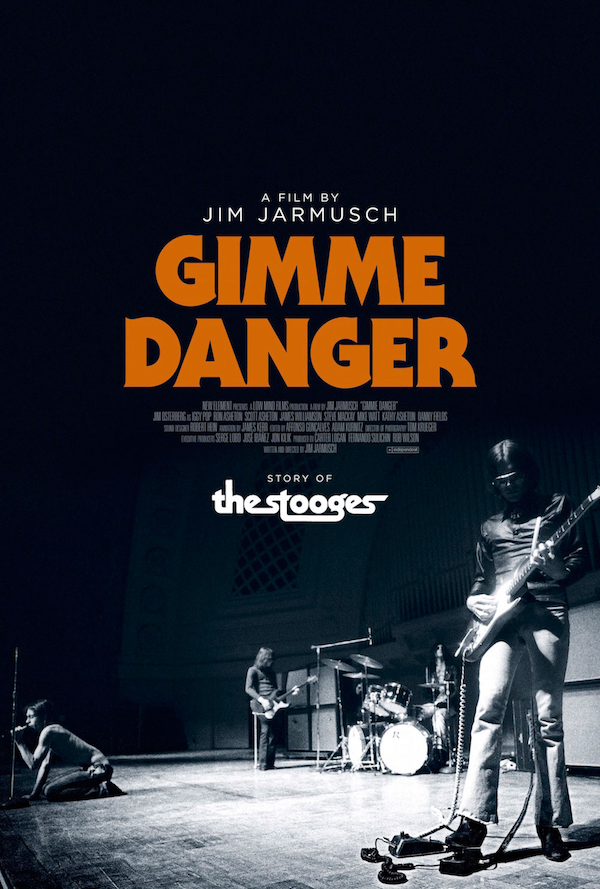 So either a Stooges-themed movie or documentary directed by Jarmusch? I was so down.

Lady Papa Punk tugged at my sleeve and whispered "these are your people!". And indeed they were. My only regret was not bringing Papa Punk business cards to hand out to the crowd which was tailor-made for the target Papa Punk demographic - 30-50-year old punk rockers and rebels of various stripes - albeit a narrow swath of stripes to be sure.

The Hollywood Theatre staff demonstrated they were equal to the task of hosting such an event, piping in Minutemen tracks before the showing, the perfect background music to accompany the popcorn chomping and t-shirt popping under way as folks milled hither and thither flashing their AAA punker credentials - here an MC5 tee, there an Iguanas tee, etcetera, etcetera.

I'll readily acknowledge that I was a little late to The Stooges experience, as they were a bit before my time. My entry into their oeuvre was mostly through the punk bands of my era doing covers of their songs, many of which I didn't realize were actually Stooges songs until later on when I laid hands and ears on some Stooges records. I mean, how was I supposed to know Osterberg in the credits referred to one Iggy Pop.

never mind this version of No Fun

In a shameful admission of my naiveté about punk roots and history, it took me awhile to figure out that I Got A Right wasn't by Poison Idea, I Feel Alright wasn't a song by The Damned and Search and Destroy wasn't originally unleashed by the Dead Boys.

Not that there was anything wrong with those versions, they bucked pretty well all on their own merit.

on the other hand this version of I Feel Alright by The Damned kicks ass, see

However when I finally bought copies of Stooges records and the needle dropped on the original versions - holy shit it sounded so raw and primal that it just destroyed those other versions.

[I don't mean to go on another tangent but crucially, these guys were another one of those bands that confounded my record alphabetization sensibilities. They released the self-titled debut and Funhouse as "The Stooges" but then Raw Power came out under the moniker "Iggy and The Stooges". Sigh. I filed them all under "S", fuck it.]

When the song Search and Destroy shot through the amazing Hollywood Theatre audio system like a cannon part-way through the film, the thought that crossed my mind was - can you believe this sound came out in 1973.

"I'm a street walking cheetah with a heart full of napalm!
I'm a runaway son of the nuclear A-bomb
I am a world's forgotten boy
The one who searches and destroys"

For a little context, let's flash back to 1973 to get a sense of the magnitude of this eruption during that time, shall we:

And that jam still makes you stand up and take notice even today. It completely bludgeons your ears. I loved what Iggy had to say while that song was simmering on lower volume in the background - that guitarist Williamson had the power to fill every nook and cranny of any space, and Iggy went with a higher pitch than usual and Scott Ashton beat on his drums like Bam-Bam in order to wriggle and squeeze their way into that sonic assault.

Speaking of that song, as a public service I feel obliged to use this as an opportunity to testify on behalf of the great Italian hardcore band that took their name Raw Power from the epic Stooges release.

I found myself making that association on the walk home from the movie and then sadly realized the Raw Power demo tape I once had is now lost and permanently residing in Hilbert Space.

Raw Power later released a full-length record on Toxic Shock records which I never got and I absolutely need to grab hold of at some point. But I've heard the record, I know Raw Power from the demo tape, and that sir is no Raw Power - to paraphrase a famous political guy.

I mean the first time I heard the song Raw Power on the demo tape, it nearly melted my punk rock boom box, an utterly raw song laced with rabid vocals shrieking unintelligibly (I think it's English?), though you can pick up short bursts of what sounds like "raw" in there (I think?). With such an unremitting primal sound, they do their namesake proud.

I do pause to wonder whether the singer still has his vocal chords from that abuse. Regardless, that's a bomb track there and is as good an excuse to rep Raw Power here as any:

Hell if The Stooges only claim to fame was inspiring this hardcore band from Italy, that would be enough to merit consideration for the Rock n Roll Hall of Fame. And the fact that they influenced a bevy of other bands in my generation just adds to the balance.

But of course they were more than just pioneers and influencers, their music is still relevant and fresh and Iggy brings it on the live show, still has the torso of those stretchy Incredible Hulk plastic dolls, only not green. That might be the most mind-boggling thing about Iggy today - how does he have the body of a 20 year old still?

It doesn't hurt a bit that Iggy's a compelling personality with a flair for story-telling that's delivered in a genuine, straight-talking manner - it's must-see stuff.

I was especially amused by his quest to write lyrics in 25 words or less, motivated by a recurring Soupy Sales bit on the Howdy Doody show. I'm pretty sure Papa Punk could not abide.

Anyways, in an age when the adjective "authentic" is so overused, from advertisements to marketing spiels to corporate mission statements, Iggy is refreshingly, truly authentic.

I don't have any personal stories about Iggy or The Stooges of my own to share and add to the tapestry that Jarmusch weaves from everyone he assembles on film.

My closest connection to Iggy is via a guy I worked with at my last tech start-up who was from Ann Arbor and who told me his dad went to school with Iggy. So yeah, I'm kinda 2 degrees of separation worth of a big deal in that regard.

I guess that was what resonated most from the documentary, that Iggy and the Stooges were regular kids, you sort of expect to know someone having gone to the same school with them and you likewise expect there would be no disavowals on their part to protect their brand. Just a salt-of-the-earth kind of band.

Further evidence of that can be found in the settings that were chosen for some of the interviews: Iggy holds court in an ordinary, humdrum laundry room with washer and dryer that look to be circa 1970s 1969 (staying with the theme) and Williamson is filmed sitting next to the basin of what appears to be a regular old bathroom like you or I might have.

These are ordinary guys who did extraordinary things with their music.

My only other strong association of the Stooges is channeled through Sonic Youth and the shows they put on in the late 80s early 90s. The SY sets always seemed to close in bedlam with a free-for-all take on I Wanna Be Your Dog. A veritable scrum would break out on stage as various members of the other bands entered the fray, all instruments getting pummeled to make as much noise as possible.

And Kim Gordon howling "Now I wanna be your dog..." over and over again with that riff. That very same riff that earned the unabashed admiration of the MC5 as we learn in the film. Anyways I loved that moment at the SY shows and that's my everlasting memory whenever I hear the song done by anyone.

Near the end of the movie Iggy spells out what he's all about by saying he doesn't want to belong to all these other things, like glam-rock, hip-hop, alternative, TV ... (and I'm going on memory here so pardon any discrepancies with actual wording):

Fair enough Iggy, but we're still gonna hold onto you as best we can. 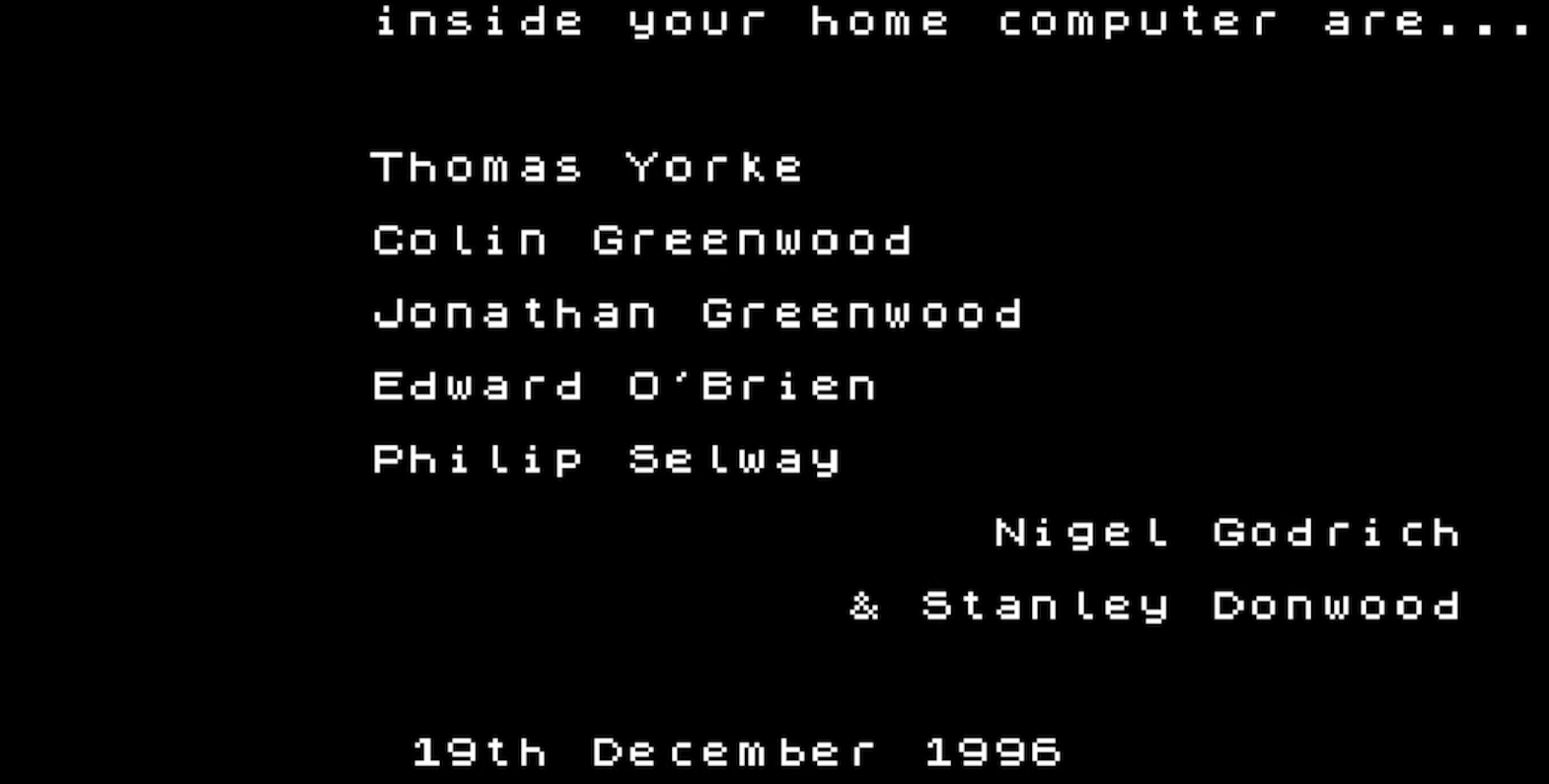 Radiohead still has the power to make me lose my mind, and that's a damn good thing.

So I've been trying to wrap my head around the fact that nearly half the people in this country have chosen to send a pig to the White House. I'm at a loss